This past weekend I saw the movie Sleight.

The genre is a combination of drama, mystery, fantasy, and sci-fi. The film stars Jacob Latimore (from Maze Runner) and Dulé Hill (from tv show Psyche). Jacob Latimore is absolutely magnetic. I do not know if it is Latimore’s magic tricks or charisma, but you can’t help but be pulled into the film. The title of the film refers to the sleight of hand magicians use when they perform a card trick. The lead character is a magician who lost his mother at a young age and began selling drugs to take care of his little sister. When really his passion is for being a master illusionist like Houdini. While performing a trick to earn money on the streets of L.A. he meets a beautiful waitress (Seychelle Gabriel from Revenge) with her own secrets. Dulé Hill does a fantastic job of preforming the role of a brutal drug dealer instead of his usual lovable sidekick role on Psyche. This film pulls you in and makes you root for Bo who is trying to get back control of his life while protecting his sister. It makes you realize that sometimes brilliant people do bad things because they don’t see another option for success. I highly recommend it! 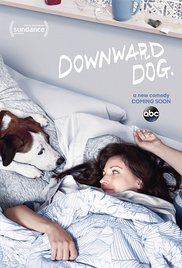 Downward Dog. Did you think of the yoga pose? That’s the first thing my mind went to. However, Downward Dog is an incredibly funny well written T.V. show on ABC. It’s written from the point of view of a dog named Martin and his life with his owner Nan a single woman working in marketing. Martin deals with separation anxiety from Nan leaving for working and spending time with her friend with benefits. Unlike other shows that have had talking pets (like the show Wilfred which I found so creepy) Martin has the saddest puppy eyes I have ever seen and is incredibly endearing. That combined with his soothing and slightly valley girl twang cracks me up. One of the lines from the show that had tears rolling down my face is when Nan ignored Martin and he says to the camera, “You think a shoe is bad? I will destroy everything you love. Like I will tear your world to pieces”. Any pet owner can relate to leaving your pet alone and coming home to find your favorite shoes, chair or rug destroyed from your beloved pet. I swear I could see my cat saying that after I left him for my four day trip to Miami. It never matters how great your pet sitter is or how much they try to love on your animal, they want their pet mom. Are there any shows or movies you recently saw that you recommend?

#fbf wishing this was my view
Disney Books will donate a book to First Books for every selfie with a book you share with the #magicofstorytelling I had the honor of meeting the two talented authors and I can't recommend this book enough. You will cry and it will spark many great conversations.
I swear I didn't fall apart. #frizzyhairdontcare #postmalone #runawaytour
I've asked myself this question a million times. Often added God what is my purpose? What can I do that will leave me fulfilled instead of restless, bored, frustrated. The answer I've found is to be kinder to myself and others, listen to my intuition and take the path that is least traveled. It can be complete terrifying, but is always way more fulfilling than taking the easy road. You can only leave your mark on the world if you follow your heart and chase your true purpose. Living Day to day and fulfilling other people dreams will never get you the joy you truely desire. What's your answer to this question? #quoteoftheday #floridagirlatheart
Longing for another trip to London after seeing Camille Pissarro's masterpiece Ornamental Lake at Kew Gardens. #supportthearts #impressionistart
Stop scrolling and like this photo. Who knew an elevator could be the perfect place for a photoshoot. #atlanta